I have been using OCBC 360 account since 2015 as its interest mechanism and returns work best for me, in a fuss free manner too. Based on my needs and financial situation, I have always treated the money in OCBC 360 account as my emergency fund (i.e. not investment fund). After many years of working and saving, my balance exceeded $70,000. From then on, I allotted the excess money into CIMB FastSaver account to earn 1.0% return in a fuss free manner (the 1% is capped at $50,000).

Every year, OCBC reviews and revises the interest mechanism and although the returns decrease each time, it is still the best option for me. In Nov 2018, OCBC the interest mechanism was revised yet again. This time, for once, the returns seem to be more flavourable for me. Basically, if you have more money in your 360 account, it will be more flavourable for you. This is because the interest rate is higher for accounts with balances of $35,001 to $70,000.

There is a new bonus interest component called “Step-up” when you increase your account balance by S$500 compared to the previous month. Also, you will earn a Boost bonus interest on the increase in your account balance compared to the previous month. You can refer to the image appended below or visit OCBC’s website for more details.

With this change, I reviewed (i) whether and (ii) how I should shift my money from CIMB FastSaver to OCBC 360. I know for sure that the Step-up and Boost bonuses are going to make a different.

I did a simulation to transfer an amount of money, which has to be more than $500 from CIMB FastSaver to OCBC 360. For calculation purposes, the amount of money transferred is $600 per month. I also assumed the following:

If you decide not to transfer any money from CIMB FastSaver to OCBC 360, you will not enjoy the Step-up and Boost bonuses. You will only get $1,574.63 of interest.

In such a case, I would just set up a monthly recurring transfer from CIMB to OCBC 360 and sit back and enjoy.

Note: I did not show calculations of other banks' saving accounts as either they did not meet my need or I am unable to meet their savings requirements to get the maximum benefit. This is not a sponsored post by OCBC or CIMB. Please do your own due diligence.

Posted by My Investment Machine at 19:00 4 comments: Links to this post

I seldom write about the Singapore Saving Bond (SSB). But I am surprise by the yield of the February 2019 tranche of SSB. Hence, this post.

Depending on your time horizon, you should watch out for the following:
What caught me by surprise was points 2 and 3 in the para above. 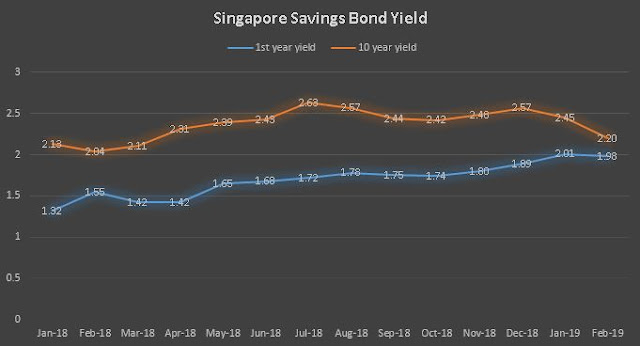 You would also notice that the gap between the first year yield and 10 years yield is smaller. This is something to take note if you intend to put your money in SSB for a long period of time.

If your time horizon is short (e.g. 1 year), the first year yield is still attractive. Moreover, SSB allows early redemption with a small application fee of $2 and accrued interest will be paid!

As stated in my previous post, I will continue to put in a small portion of my emergency funds into SSB for a year period since it beats putting them into a saving account and SSB is more fluid than fixed deposit.

Posted by My Investment Machine at 19:00 16 comments: Links to this post 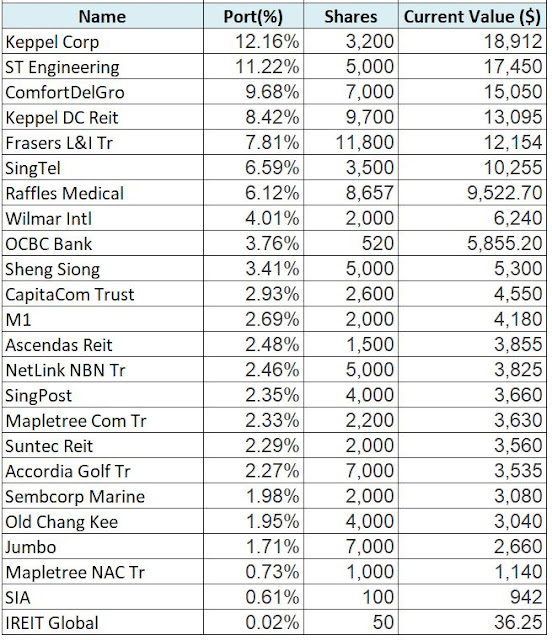 Despite the temptations, I did not make any transactions in Dec 2018.

Since I had elaborated on my thoughts for next year in my earlier post, I will not bored you. I am looking out for Singapore Saving Bonds next tranche which will be out over the next few days!

* Dividends are recognised after ex-dividend (xd) date
# Excludes investments in Cryptocurrency since it is of high risk and with an investment fund which I am prepared to write off.

Posted by My Investment Machine at 21:48 2 comments: Links to this post